Downtown Chicago's "Cow Path" from 1844 is still protected by law.

To get the entire history of how this "cow path" came to be, one must go back to the year 1833 when Chicago was incorporated as a town on August 12th, with a population of about 350 inhabitants.
Fresh off a project as a carpenter involved in the construction of the Erie Canal, one of the region’s early settlers, Willard Jones, migrated from New York and decided to set down roots. For $200, he purchased several plots of land in the area that today comprises the Loop business district of downtown Chicago. Willard built a farmhouse and some out-buildings and successfully operated it on this terrain for a number of years.
Chicago was incorporated as a city on March 4, 1837. As the population started to grow and early industry emerged, real estate began to gain in value as early developers looked for ways to utilize land in ways more profitable than agriculture. In response to this phenomenon, Jones began selling off parcels of his land in 1844 in the surrounding vicinity of what today encompasses Clark Street on the east, LaSalle Street on the west, Monroe Street on the south, and Washington Street on the north. On this land, some of the original commercial properties in downtown Chicago were eventually erected and this ultimately planted the seeds for the birth of the Loop business district.
Jones sold the southern portion of his property to Royal Barnes in 1844. Jones continued to operate a smaller version of his farm in the vicinity of the present-day intersection of Clark and Monroe. Two years after the Barnes sale, Jones sold the northern half of his original property to Abner Henderson. Written into the property deed was a provision that Jones would have access to Monroe Street via a 10-foot wide corridor west of the Barnes land to be used to take his cattle from farm to pasture just to the south, where the Board of Trade now stands. No construction was permitted which would obstruct this cow path in any way. As downtown Chicago began to develop over the upcoming decades, the easement was held legally binding by the Illinois Supreme Court in 1925.
In 1927 the owners of the old Barnes property were ready to erect a 22-story office building at Monroe and Clark. By then they’d acquired title to the 10-foot-corridor. But the owners of the Henderson plot to the north still had that right-of-way guarantee and refused to surrender it. The courts ruled that work could go ahead on the Barnes property, but only if the access corridor was retained. So architect Frank Chase redrew his plans. In the end, the 100 West Monroe Building was constructed with an 18-foot-high tunnel through its western edge, big enough for any farm animals or hay wagons that might be passing through the Loop.
In 1937, to celebrate this unique attribute, Mayor Edward Kelly affixed a bronze plaque on this portion of the building proclaiming the tunnel was “reserved forever as a cow path.”
The plaque read as follows:

“Historic Cow Path: This areaway 10 x 177 x 18 feet is reserved forever as a cow path by the terms of the deed of Willard Jones in 1844 when he sold portions of the surrounding property. Erected by Chicago’s Charter Jubilee and Authenticated by the Chicago Historical Society, 1937.”

While the plaque is long gone and unaccounted for, this unique bit of Chicago history still exists today. However, in 1969 when the Two First National Plaza Building was erected at 20 South Clark, it blocked off the northern end of the cow path.
According to a 1979 Tribune article, both Chicago Title & Trust and the Chicago Historical Society declared that the action was legal, and there don’t seem to have been any court challenges to it. 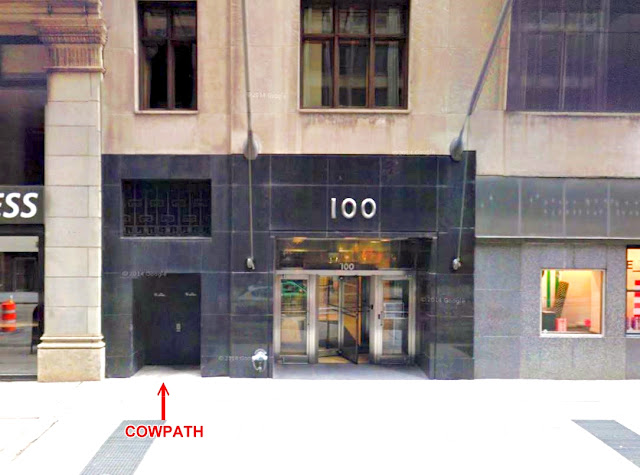 When the Hyatt Corporation began converting the 100 West Monroe building into a hotel, Chicago historians feared that the cow path would be totally obliterated. Happily, hotel management has a sense of history and has preserved it. Hyatt also has a sense of whimsy. One of the hotel’s conference rooms is named for Willard Jones. 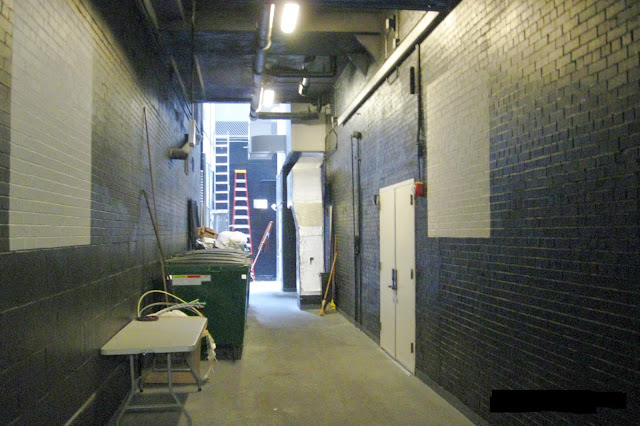 You can still use the cow path tunnel as a shortcut through to LaSalle Street if that’s your pleasure.