Frontier settlement hierarchy by the number of residents.

Throughout human history, few settlements could support a population greater than 100 people, and settlements were too small or scattered to be considered "urban." Services within these settlements, if any, were generally limited to the bare essentials: i.e. church, general store, blacksmith, post office, a doctor, volunteer fire brigade, etc. 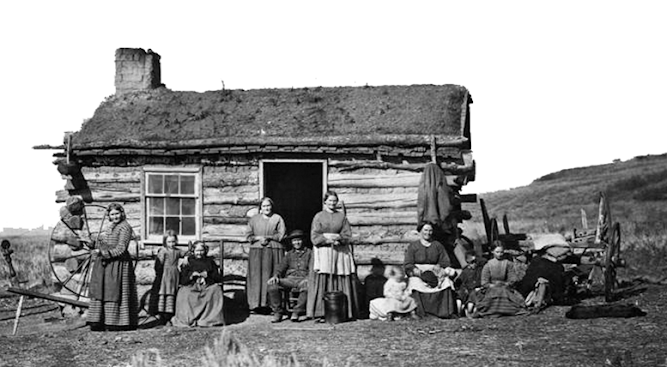 Before 1800, the minimum homestead lot size was 640 acres. At the turn of the 19th century, the minimum lot size was cut to 320 acres. Settlers must make some improvements to the land, build a cabin or service structures, raise crops, raise livestock, etc. The price per acre remained fixed at $1.25 per acre ($400 total for 320 acres; $13,625 today) until 1854 when federal legislation was enacted establishing a graduated scale that adjusted land prices to reflect the desirability of the lot. Landowners were allowed to pay for the land in 4 installments.

A Roadhouse: often considered the smallest type of human settlement.

Stagecoach Stops: served travelers by offering meals, alcoholic beverages, overnight accommodations and stable services that included feed, grooming services, and hopfully, a connections with a local Farrier (horseshoer).
A Homestead: usually consisted of a cluster of isolated dwellings traditionally occupied by a single extended family and often had several structures, one or more houses, outbuildings, and farming structures.
A Social Band: is the simplest level of a foraging society with generally a maximum size of 30 to 50 people. Sharing fruit & vegitables and slaughter, in a cooperative (Co-op) style of community.
A Hamlet: has a tiny population of 10 to 100, with few houses and outbuildings.

A Large Village: is a human settlement or community with a population between 500-2,000.