Abraham Lincoln's vocabulary and his violence. What the &@%! is up with this S#%¢? 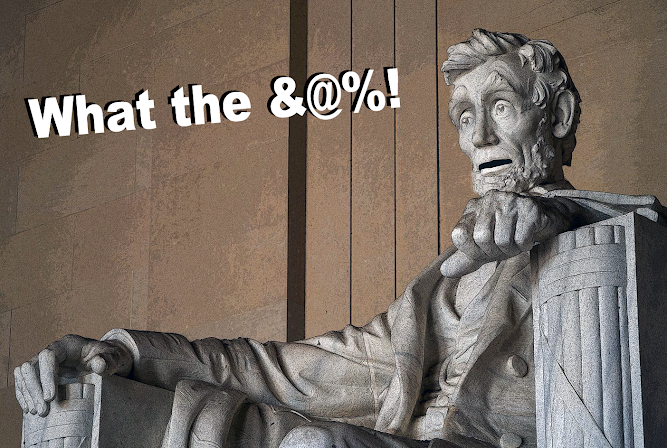 To the Editor of the Boston Herald:
Many of your readers were deeply startled and grieved to read in one of your editorials on February 13, 1941, that Abraham Lincoln often used profane language and that he was accustomed to throwing people out of his office by physical force when they appealed to him for favors.
If you have any evidence supporting either of these statements, you owe it to your readers to let them know what such evidence is. Such statements cannot be based upon personal recollections, in all probability, for Lincoln died 75 years ago (printed in 1941), and it is not probable that any of the present editors of The Herald were then living.
John G. Nicolay and John Hay, his secretaries, in their elaborate reminiscences of Lincoln, make no mention of Lincoln's doing any such thing. Neither does the Rev. William E. Barton, who has written several books on Lincoln.
Nobody ever had any greater reverence for the Master of the Universe than Abraham Lincoln. In a notable address, he referred to his steadfast reliance upon Divine Providence, "without which I cannot succeed and with which I cannot fail." To suppose that such a man as Lincoln would use obscene language seems to me unthinkable.
As for throwing people out of his office, it seems preposterous that Lincoln should ever have descended down to the level of a bar-room fighter or loafer (bouncer).
Signed:
"INTERESTED IN LINCOLN"
West Newbury, Massachusetts
February 1941
Editor's Response:
There is no doubt about the correctness of the statements in The Herald editorial. Lincoln's faith in the Master of the Universe was not mentioned. He was deeply reverential, but we would remind our correspondent that even the profane and the violent may be good and godly. —Editor.

COMMENT: Abraham Lincoln often used profane language, and he was accustomed to throwing people out of his office by physical force when they appealed to him for favors and requests.

Lincoln, known for his loneliness and melancholia, uttered at least a few profanities in the White House. He was known to tell off-color anecdotes and jokes. Experts have dedicated a lot of thought to Lincoln’s particular sense of humor.

One reported of Lincoln: “When hunting for wit, he had no ability to discriminate between the vulgar and refined substances from which he extracted it. It was the wit he was after, the pure jewel, and he would pick it up out of the mud or dirt just as readily as he would from a parlor table.”

Lincoln didn’t make a habit of swearing, but he did break out the curse words occasionally, especially when his temper got the better of him.
As for the F-word being “virtually nonexistent” during the Civil War, while the term wasn’t as common or endowed with so many meanings as it is now, it wasn’t unknown. It was rare to see the F-word in print, of course, although even during the Victorian era it appeared in pornographic stories.
Compiled by Dr. Neil Gale, Ph.D.
Presented by Dr. Neil Gale, Ph.D. at 8/25/2021 04:08:00 PM