In 1856, Mary Todd Lincoln pulled off the greatest surprise on Abe. Mrs. Lincoln apparently was no exception to the rule of women being admittedly the prime movers in home improvement. In fact, she had the Lincoln home in Springfield, Illinois, completely remodeled from a story and a half to a big two-story house while Circuit Lawyer Abe was out of town. She wanted to surprise her husband when he came home, and she certainly did. She had spent $1,300 ($375,000 today) on her modernization project. That was a lot of money in those days. It was about as much as Lincoln had originally paid for the house. Keep in mind that Lincoln traveled the Eighth Judicial Circuit for nearly six months of the year.
According to the story, Lincoln came striding up to his property at the corner of Eighth and Jackson Streets (413 South 8th Street, Springfield), carrying a beefsteak under his arm, and he didn't know his own house. But he got to like it all right. The family sitting room, which measured 16 by 20 feet, and adjoining formal parlor that opened through a large double door, soon became a frequent meeting place for Abe's political associates. 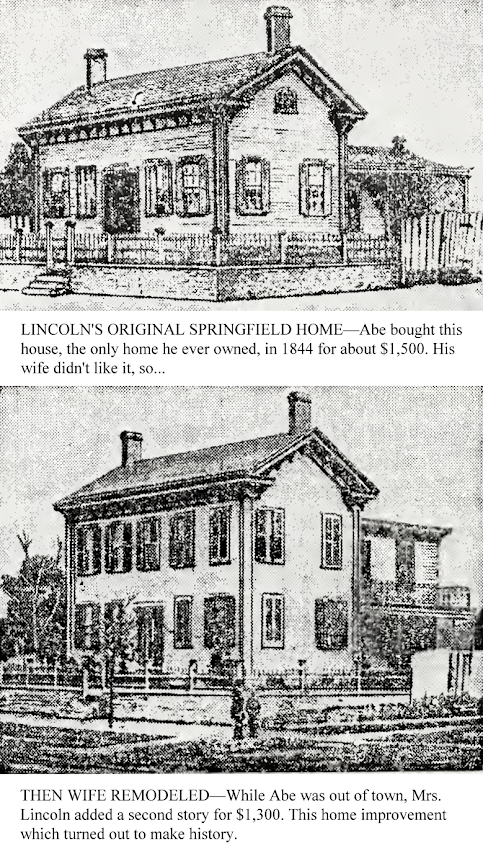 Mary Todd Lincoln had that house remodeled because she didn't like it. You've probably heard that reason in connection with modern remodeling jobs. And she seemed to be a woman who could get what she wanted. She always said Lincoln would land in the White House.
But Mrs. Lincoln had been very disappointed when Abe bought the house in 1844 from the Rev. Charles  Dresser. Even though her husband would show her the solidity of its hand-hewn oak construction, wooden pegs, walnut clapboards, and shingles, she thought the house was ugly and wanted a bigger house.
However, the house had seven rooms, several fireplaces and occupied a lot 50 by 152 feet, which also contained a woodshed, privy and carriage shed. In order to save up enough money to buy the place, Lincoln spent virtually nothing on himself, even giving up his handball games which had cost him 10¢ per game.
One drawback to the house was that the two bedrooms upstairs had such low ceilings where Lincoln could stand erect only in the center under the ridge of the roof. Mrs. Lincoln fixed that. She raised the roof 12 feet, added several bedrooms upstairs, installed new wood stoves in place of fireplaces, and had bookshelves built for Abraham's law library.
The exact amount that Lincoln had paid for the house is not entirely clear. Carl Sandburg in "The Prairie Years" says the deal involved $750 in cash, plus a lot Lincoln owned which was valued at $300. However, Sandburg notes there was a mortgage for $900 on the 'property which was not mentioned in the deed, Lincoln apparently trusting the Rev. Mr. Dresser to get rid of it.
A contract in Lincoln's handwriting mentions $1,200 as the price, but some historians say the final price was actually $1,500.
We asked Myron Matthews of the Dow Service Building Reports to give us an estimate of what it would cost to build that house today. He figured that $20,000 might do it, with $5,000 added for the lot. In some ways, this puts a pretty low value on the 1850s dollar.
Compiled by Neil Gale, Ph.D.
Presented by Dr. Neil Gale, Ph.D. at 11/25/2020 10:41:00 PM