Lincoln Forced to Walk Home from Wisconsin when his Horse was Stolen.

Lincoln's brief, but memorable, relationship with Wisconsin began in the summer of 1832, in a company of Army regulars and Illinois militiamen commanded by Gen. Henry Atkinson. The troops had been sent in early spring to reduce the threat of an India n war in the Illinois and Michigan Territories (Wisconsin then was a part of the Michigan Territory), and were pursuing the rebellious Chief Black Hawk—then in his early 60s—and his courageous band of Sauk and Fox. The federal government had moved the Sauk and Fox from Illinois to Iowa, but in the spring of 1832, Black Hawk led his band back across the Mississippi River to attempt to regain their croplands near Rock Island, Ill. His people were hungry, and he claimed the chiefs had been given mind-numbing firewater before agreeing to turn over to the U.S. all of their lands east of the Mississippi.
At the time, the lanky Lincoln was just 23 years old. Back home he had tested his luck as a shopkeeper's assistant, but the store failed. And he was waging a losing race for the Illinois legislature. Perhaps that was why the promise of $125 ($3,250 today) and 165 acres of land for a short tour of duty with the militia seemed appealing.
Here, he was part of a throng of soldiers, about four times the number of Black Hawk's 1,000 Indians, 500 of the warriors, relentlessly on their trail. The defeat of these Native Americans would signal the opening of this wilderness area to white settlement.
Lincoln saw no combat, but he and his fellow soldiers soon became weary as they struggled through the heat, rain, mosquitoes, and never-ending discomfort of what was then the wilds of what would be northern Illinois and southern Wisconsin—always seeing the outnumbered Indians slip away as troops closed in.

Lincoln's speech; Comment about being in the Black Hawk War.
The friends of General Lewis Cass, when that gentleman was a candidate for the presidency, (In the 1848 presidential campaign, Lewis Cass was the Democratic nominee but was defeated by the Whig candidate, Zachary Taylor.) endeavored to endow Lincoln with a military reputation.

Mr. Lincoln, at that time a representative in Congress (1847-1849), delivered a speech before the House, which, in its allusions to General Cass, was exquisitely sarcastic and irresistibly humorous:
"By the way, Mr. Speaker," said Mr. Lincoln, "do you know I am a military hero? Yes, sir, in the days of the Black Hawk War, I fought, bled, and came away. Speaking of General Cass's career reminds me of my own. I was not at Stillman's Defeat, but I was about as near it as Cass to Hull's surrender, and like him, I saw the place very soon afterward. It is quite certain I did not break my sword, for I had none to break; but I bent my musket pretty badly on one occasion. If General Cass went in advance of me in picking whortleberries, I guess I surpassed him in charges upon the wild onions. If he saw any live, fighting Indians, it was more than I did, but I had a good many bloody struggles with the mosquitoes; and although I never fainted from loss of blood, I can truly say I was often very hungry."
Mr. Lincoln concluded by saying if he ever turned democrat and should run for the Presidency, he hoped they would not make fun of him by attempting to make him a military hero!

As his stint of several months came to an end, he received his discharge. Official word came July 10, 1832, while he was camped with 3,000 soldiers in a place now called Burnt Village Park, near Cold Spring, midway between Jefferson and Whitewater.
As many as 1,000 men got their orders at the same time. That's why it was no surprise that Lincoln's horse was stolen that night. But the iron-willed young man was not deterred and would walk and canoe his way back to his home in little New Salem, Illinois, where the next year he would become its postmaster.
The trek would be a long one—250 miles.
Two and a half decades later, in 1859, Lincoln would pass this way again, on a speaking tour that reached Beloit and Janesville. Remarkably, the next year he would be elected to the White House, the 16th president of the United States.
NEWSPAPER ARTICLE
February 12, 1934: Horse Stolen, Lincoln Forced to Walk Home from Wisconsin. 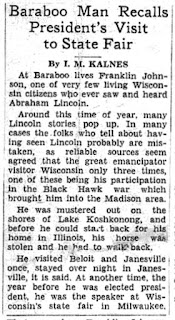 At Baraboo lives Franklin Johnson, one of very few living Wisconsin citizens who ever saw and heard Abraham Lincoln.
Around this time of year, many Lincoln stories pop up. In many cases, the folks who tell about having seen Lincoln probably are mistaken, as reliable sources seem agreed that the great emancipator visitor [visited] Wisconsin only three times, one of these being his participation in the Black Hawk War which brought him into the Madison area.
He was mustered out on the shores of Lake Koshkonong, and before he could start back for his home in [New Salem] Illinois, his horse was stolen and he had to walk back.
He visited Beloit and Janesville once, stayed overnight in Janesville, it is said. At another time, the year before he was elected president, he was the speaker at Wisconsin's state fair in Milwaukee.
In July of 1832, 23-year old Abe Lincoln's horse was stolen in Wisconsin so he walked and canoed 250 miles back to New Salem, Illinois. The historical marker is located at Cold Spring Creamery Park, Fort Atkinson, Wisconsin. 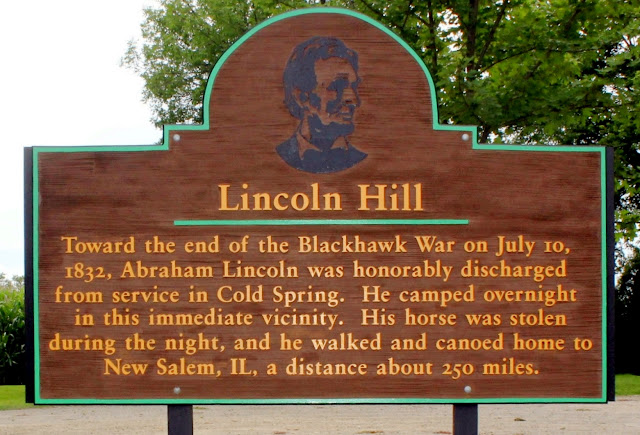