The Brief History of Mickelberry's Log Cabin Restaurant (1933-1967) including restaurant bombing in 1964.

Mickelberry's Log Cabin restaurant first opened in 1933. The original restaurant design was based on the Mickelberry plantation home built in Spaulding County, Georgia, in the 1830s. The restaurant was divided into three rooms - the "Main Dining Room," the "Lincoln Room," and the cozy little "Blue Room." 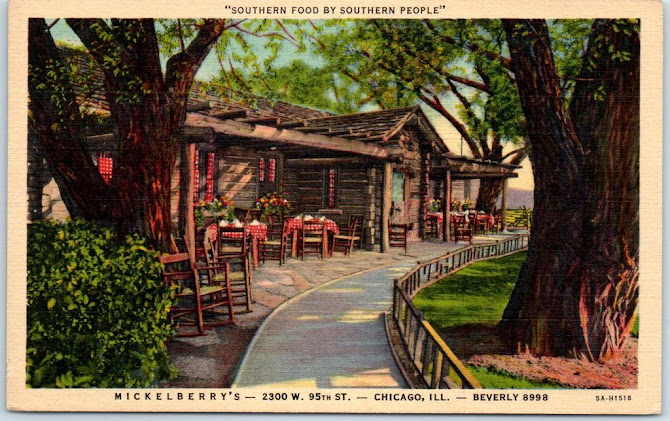 Campbell Wallace Mickelberry, along with his oldest brother Charles, and Jay Adler were partners in the restaurant. Adler was a horse lover-owner, a true Civil War buff, an authority on Indian history, and an antique collector. Mrs. Mickelberry ran the restaurant along with Mr. Adler for several years after Campbell and Charles died in the 1940s. 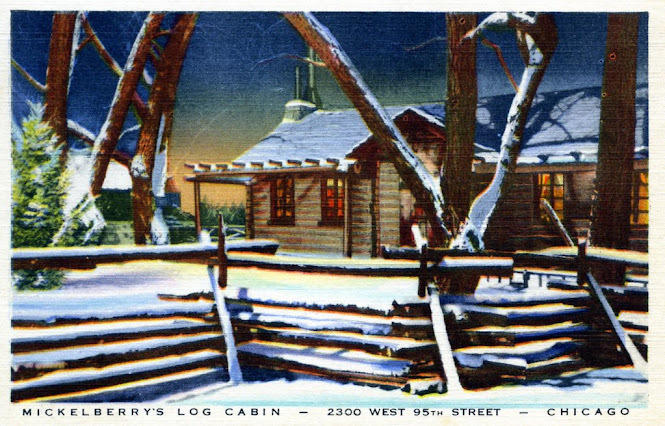 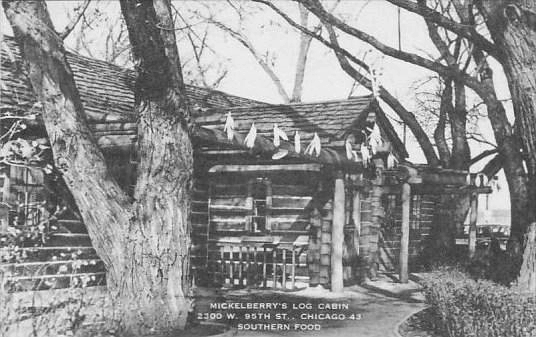 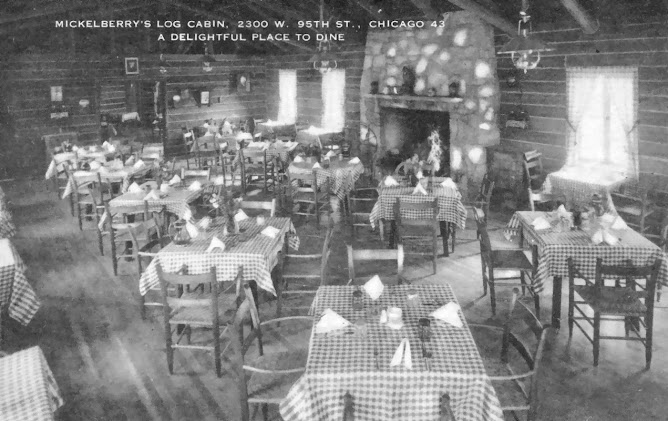 They also packaged the sausages and sold them to restaurant customers. For after dinner they had fresh-from-the-oven fruit pies and custards. Mickelberry's was a true family restaurant because there were no alcoholic beverages served. The Mickelberry's brought their old family recipes with them to Chicago from Georgia in the 1890s.

Much of the Confederate artifacts were Mickelberry family possessions brought north from Georgia. Mr. Adler was responsible for contributing most of the incredible pictures, etc. from the "Old West" where he must have lived at one time. It is believed that most of the items were sold at auction after the restaurant closed. 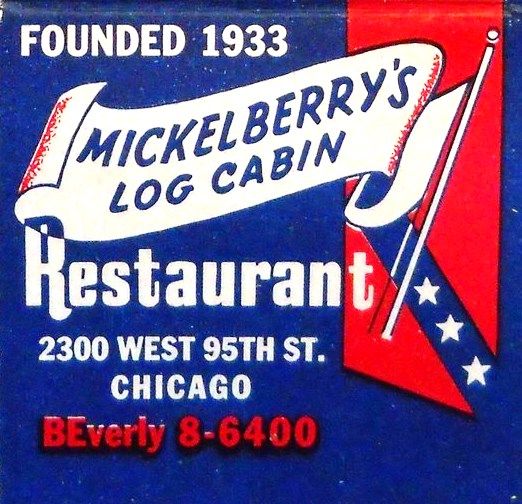 Mystery Blasts Baffle Chicago
46 in the Area in 18 Months
None Has Been Solved.

CHICAGO, Saturday, August 1, 1964 — Four bombings this week raised to 46 the number of bomb or arson attacks on Chicago area businesses in the last 18 months. Twenty‐two of the targets has been restaurants. Two restaurants were bombed last weekend, the damage at one estimated at $40,000. The third bombing in a 24-hour period occurred at an automobile plating plant. The fourth bombing in three days was at a trucking terminal.

None of the crimes has been solved, and all of those concerned—the victims and the authorities—profess to have no idea of either the motive or the possible identity of the perpetrators. Law enforcement agents and insurance investigators say they wish they knew.

William J. Cowhey, the Illinois State Fire Marshal, who investigates all such incidents outside of the city, where most of them have occurred, said: “There's just no rhyme or reason for them. I wouldn’t know what the motives are.” He suggested, as possible motives, extortion, insurance, competition, business failure. But he acknowledged that he was only guessing.

Chicago Detective Sergeant Edward Neville, who investigated the recent bombing of Mickelberry's Log Cabin Restaurant on Chicago's Southside, said: “There doesn’t seem to be any motive at all.” He said the manager of the restaurant insisted he had had no trouble with unions, customers, suppliers or competition.

Sgt. Drew Brown, who heads the Chicago police bomb and arson detail, suggested that the bombers “are just picking these places at random.”

Robert May, chief special agent in charge of the Chicago office of the National Board of Fire Underwriters, said he doubted if there was any single motive for the bombings and arson fires.

“We’ve found a few that may be fraud and insurance fires,” he said. “But they were very few. Most of them were not. I have no idea what's behind them.”

While law enforcement investigators reported repeatedly that owners of places bombed or burned could give no reason for the attacks, at least a dozen restaurateurs interviewed by newsmen expressed fear that the wave of restaurant bombings might be the prelude to a campaign of extortion and terrorism by crime syndicate hoodlums.

The owners, who asked that their names and establishments not be identified for fear that “something might happen,” expressed belief the bombings are “a message to get others inline” to pay protection money to syndicate extortionists or to force the sale of products and supplies from hoodlum‐owned purveying firms.

The bombing resulted in extensive damage to the entrance of the restaurant but it was limited and the restaurant continued to operate for another 3 years. Mickelberry's Log Cabin restaurant was razed in 1967.