The History of Keeneyville, a Bedroom Community in unincorporated DuPage County, Illinois.

The area called Keeneyville, which never incorporated, was named after Albert F. Keeney (1872-1950), who was among the first settlers.
On October 4, 1897, Lake Street School District 20, Bloomingdale, opened the doors of a one-room log cabin schoolhouse with 9 students, ranging in age from five to twelve years old, and Ms. Eunice P. Batten, the only teacher. The first school building was used until approximately 1914. Then sometime in the 1920s, a new building was built. However, there is no information available where classes were held. By 1930, Lake Street School had two classrooms and 18 students.

A Word about Albert Keeney. 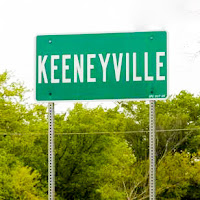 Albert Keeney, a native-born Iowan, and a real estate developer decided to subdivide his farmland along Lake Street into individual plots for homes. The Keeneyville subdivision was created when Albert and Virginia Keeney signed and recorded the land plat in 1932.

People knew Albert as a very colorful man. His hair was white and he always wore a red Marshall Field necktie which he bought by the gross (twelve dozen).

Mr. Keeney became a leader in the community. He donated land to the Keeneyville Bible Church in addition to making other major contributions to the church. The Lake Street School also benefited from Albert's generosity, as he even donated the sign that hung over the school's entrance.

A Keeneyville Old-Timer Recalls.
Mrs. Mary "Mae" (Durkin) Miller, who lived to be 100 years old, and her husband Francis, were one of the first homeowners in Keeneyville. The lake in Keeneyville was considered by the local Indians to be a great fishing spot. According to Mrs. Miller, the lake was reduced to a swamp when drainage ditches were cut, and fill material was dumped in the lake during the original construction of Gary Road back in the 1930s.

The small hidden lake in Keeneyville is still there.
Maps show Virginia Road going south from Lake Street (U.S. 20) two blocks to where Virginia ends at Lawrence Avenue but that's incorrect. Virginia actually dead-ends at Foster Avenue which is one block south of Lake Street due to a tiny lake that interrupts the street further south. You'd never realize that there is a body of water there because it's hidden by surrounding trees, bushes, and scrubs. South of the lake Virginia picks-up again and continues a block and a half south to Lawrence.

Vernon Drury Case & Case Foundation Company.
In 1952 Vernon Drury Case and his wife Henrietta Ellis bought ten acres of farmland on Lake Street (US 20) with a seriously dilapidated Victorian-style house and several, barely standing, out-buildings in Keeneyville, Illinois.
This is where the Case Foundation Company began by raising capital for their new company, which would become the world headquarters of "Case Foundation Company." The company laid foundations for many of Chicago's great buildings, including Marina City, Sears "Willis" Tower, Standard Oil Building, and John Hancock Center. Vern Case is considered one of Keeneyville's most successful businessmen.
A beautifully written Biography of Vernon Drury Case, written by his grandson, Vernon Case Gauntt.

Big Trouble in Little Keeneyville.
Because Keeneyville is such a small subdivision, not too much excitement occurs there. But on October 30, 1955, the Chicago Daily Tribune reports:

Eighteen young men arrested October 22 as they were about to begin a gang fight in Keeneyville, DuPage county, were fined a total of $375, including $108 court cost, by Kennith H. Winters, Bloomingdale township justice of the peace, in Roselle, Illinois yesterday [October 29, 1955].

The fines [per offender], including costs, ranged from $16 to $31 ($160 to $310 today). In addition each of the teen-agers was orderd to observe a 9 p.m. curfew for 90 days, and to be home by 8 p.m. thru tomorrow night. Each was charged with disorderly conduct. An adult overheard discussion of the battle plans and notified the Dupage county sheriff's office, which sent several squads to the scene. They arrived at the intended battleground, a school yard at Lake Street and Gary Avenue, just as fists were about to fly.

Another article says the gang fight was between Keeneyville boys, which called themselves “The Keeneyville Swamp Rats,” vs. a group of Roselle boys.