The Jewish Industrial and Manual Training School of Chicago. 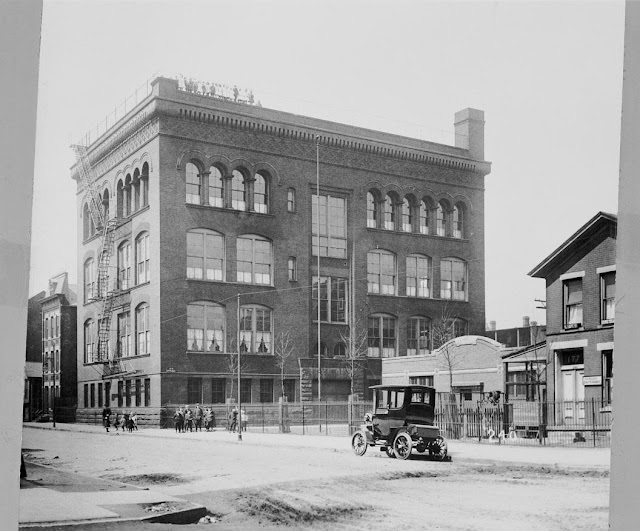 From the Occident (American Jewish Advocate Monthly Periodical) - May 25, 1888

THE BEGINNING
Monday evening, May 21, 1888, the newly elected board of directors met according to a call at the Sinai Temple's vestry rooms to elect executive officers for the ensuing term. Mr. Chas. Schwab was nominated for president and was unanimously elected. The secretary was instructed to cast one ballot for Mrs. Martin Bache for vice-president. Mr. J. L. Gatzert was nominated for treasurer and received the entire votes, (his bond with two endorsements to be $50,000). Mr. Henry Greenebaum was next unanimously chosen for corresponding secretary. Madame Joseph Spiegel received the unanimous vote for financial secretary. 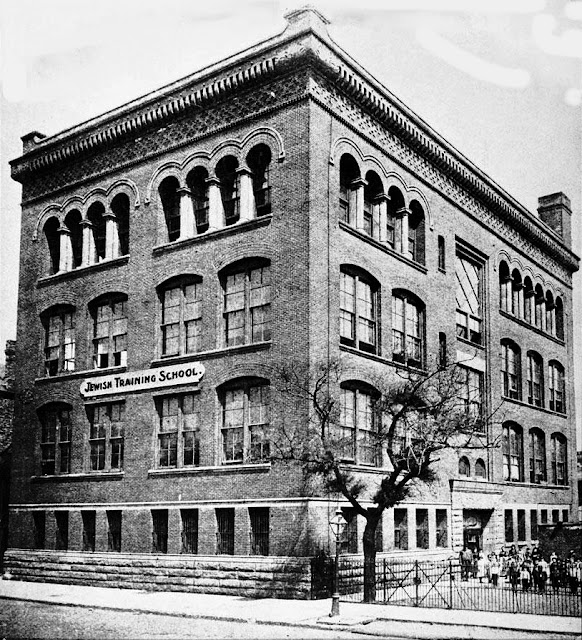 A VISIT TO THE JEWISH TRAINING SCHOOL
A magnificent institution richly endowed by Leon Mandel and the Jews of Chicago by voluntary contributions, situated on Judd between Clinton and Jefferson streets, and in the midst of the Russian-Polish settlements; containing now some eight hundred children of both sexes and under the superintendency of Prof. Gabriel Bamberger.

The editor of The Occident paid a brief visit to this School last week and was most agreeably impressed with the system, order, decorum and general arrangement of the School, which is destined to reform and improve the new generation of these helpless people, who were driven from their homes and firesides in Russia. We noticed many interesting features which exhibit the acumen of a thorough pedagogue, and by progressive instruction leads the hands and minds into channels of practical knowledge, even the youngest children from 3 to 5 years of age. A corps of able assistant teachers are at work in carrying out the discipline and systematic studies which are so greatly simplified and improved, that nothing can impede the acquiring of all elementary branches of education. It is not only a pleasure to observe the deft hands of those children in their work but one of the greatest blessings which humanity is capable of bestowing upon their less favored brethren.

Eighteen spacious school rooms are now fully occupied with these children. From the most infantile apartments to the most advanced and higher branches of tuition, this School is a model. The manual training department is however the great aim and is destined to make the pupils not only self-sustaining in after years but useful members of society. The English language only is used. The kindergarten for the infantiles is one of the most inductive of its character in our city. The sewing, dress-making, embroidering, mending and repairing departments are well nigh perfect. The modeling and designing in clay department is a feature that in our youth was not known except in schools of art and sculpture, but even this is a part of this School to bring out all the genius and talent which children and youth possess. The greatest facilities are given in this School, and great care is taken in giving children the physical exercise through gymnastics and calisthenics.

The ventilation and heating of the rooms are perfect. The scholar of this institution when he graduates may retain a record of his work from the day he enters until he leaves the institution. Professor Bamberger is the patentee of a triangular pencil used in this School and other institutions in this country, which has entirely supplanted the slate and slate-pencil. It does away with smut, avoids the crating and scratching so annoying to many. Altogether, this Jewish Training School is a model of its kind in the Far West.

HISTORY
The School was founded with a generous grant of $20,000 from Mr. Leon Mandel in May of 1888, to maintain a kindergarten for children too young to attend public School, a kitchen garden and sewing school for girls more advanced in years and particularly a manual training school where boys may learn to love work, find out for what kind of work they are best fitted, and receive that preparation and assistance which will make them intelligent, skillful, competent workmen, in that department best adapted to their abilities. It was a manual-training school, not a trade-school, where pupils receive an excellent general education.

The School was a beautiful four story building, designed by Adler and Sullivan, made possible by private donations, located on Judd Street between Clinton and Jefferson, in the immediate neighborhood where most of the children lived.

The Russian Jews emigrated to Chicago in large numbers in the 1880's, and the purpose of the Jewish Training School was to teach the English language and familiarize the new arrivals with American methods and institutions. The School's curriculum was designed to equip the sons and daughter of the Jewish poor with the power of making a healthy, honest and honorable livelihood, and with the desire of living in a respectable and self respecting manner.

For economic and religious reasons the newly arrived Russian Jews huddled together in what became known as the Ghetto, until a city within a city was built up where, if the building had been removed, each person would have less than a square yard upon which to stand. Centuries of persecution and restrictions in occupations had rendered the newcomers unfit to grapple with the conditions under which they now lived.

The School's curriculum was based upon corrective measures and training in handwork.
From its founding the Jewish Training School accepted boys and girls, and one goal was to place before these children as many elementary trade activities as possible, in order to find out their bent, and then encourage and direct them along lines which their natural abilities seemed to trend. The academic work was to be as practical as possible and to be brought in touch with the handwork. For the girls the School sought to connect them with domestic and commercial worlds. The School building was destroyed by fire in 1953.