Chicago, Aug. 1, 1894 - Flames tonight destroyed more property, and in a shorter space of time, than any fire in Chicago since the big conflagration of 1871.Over $3,000,000 worth of buildings, lumber, electrical apparatus, cars, car wheels, castings, stoves, patterns, and other material were consumed in a blazing furnace of over half a square mile in less than three hours' time. 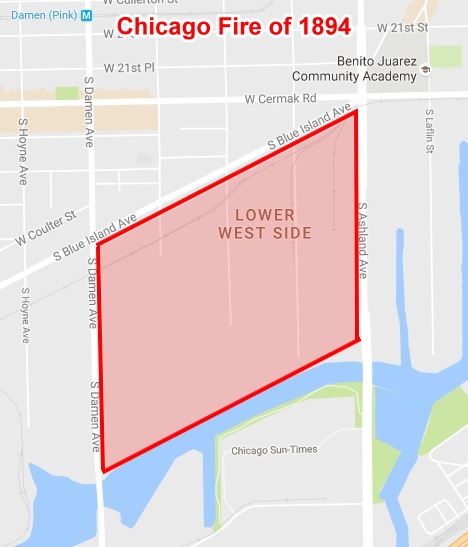 The fire was in what was known as the lumber district. The territory burned over was bounded by Ashland Avenue on the East, the south branch of the Chicago River on the South, Blue Island Avenue on the North, and Roby Street (Damen Avenue) on the West. The fire was the worst the department has been called on to fight in the last twenty-two years.

There were many casualties among the firemen and spectators. The only death, as far as known, was that of a boy who fell from a lumber pile in a river slip and was drowned.

Among the firemen injured were the following:
The firms whose property was destroyed up to 10 o'clock and the estimated losses are as follows:
The total insurance will probably not exceed half the amount of the losses.