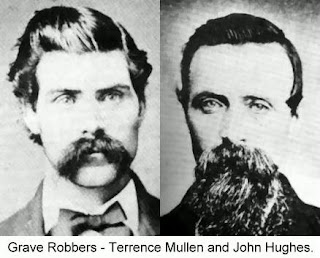 In the 1870s one of the nation's largest counterfeiting rings was headquartered in central Illinois. Problems arose for the gang when Ben Boyd, the gang's master engraver, was imprisoned. Soon their supply of counterfeit money was almost gone. The gang needed an idea for freeing Ben Boyd. Therefore, "Big Jim" Kinealy, the crew's leader, hatched a plot to steal Abraham Lincoln's body. President Lincoln's remains would be held as ransom until the government paid $200,000 in gold and freed Ben Boyd.

One night in Springfield one of Kinealy's conspirators drank too much and revealed the entire plot to a woman. She told some others, and the story soon spread throughout the entire town. The gang of grave robbers fled the city.

Kinealy would not give up, however. He moved his headquarters to Chicago. A man named Lewis G. Swegles patronized the saloon Kinealy operated there. Kinealy accepted Swegles into his gang. Little did Kinealy know that Swegles was actually a Secret Service agent. The plans were made - Lincoln's body would be stuffed into a long sack, put in the back of a horse-drawn wagon, taken to northern Indiana, and temporarily hidden amidst the sand dunes. While the nation was in an uproar, the ransom terms mentioned above would be announced.

The date for the grave robbery was set: November 7, 1876. This was an election day, and Kinealy figured Oak Ridge Cemetery would be deserted that night as Springfield citizens waited for the votes to be counted. The gang went to the cemetery, sawed the padlock off the iron door of Lincoln's tomb, pried the marble lid off the sarcophagus, and attempted to lift the heavy wooden coffin. 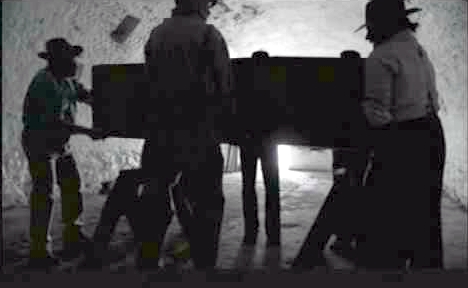 At this point, Swegles was ordered to bring the horses and wagon up to the tomb.

Instead, Swegles alerted the eight detectives who were in hiding. These men, with revolvers cocked, rushed to the tomb. However, the thieves had been waiting a hundred feet away in the darkness. The tomb robbers escaped out the east gate of the cemetery. 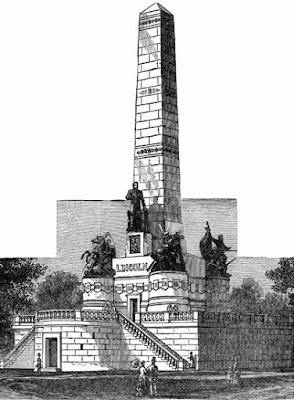 Nevertheless, they were captured in Chicago 10 days later. Robert Lincoln, Abraham's son, hired the best lawyers in Chicago to prosecute Kinealy's gang. The case didn't come to trial for eight months. Finally, the trial began, and the grave robbers were found guilty and sentenced to one year in Joliet State Prison. On June 22, 1877, a train took the convicted tomb robbers to the prison to begin their terms.

This strange event was partially responsible for Robert Lincoln's actions in 1901 when Abraham Lincoln's body was buried permanently.

One reason for the tomb robbers' boldness and perseverance with their plot was the knowledge that Illinois only punished convicted grave robbers with a year in the county jail. Three years after the attempted theft of Lincoln's remains, the Illinois legislature revised its statute on robbing graves with a penalty of up to 10 years in the state penitentiary.