The Cleaver Soap and Perfume Company was first founded in London by William Cleaver in 1770. Today it's called Yardley London, which is still in business.
Charles Cleaver (1814-1893) was born in London, England, on July 21, 1814. Then when he was just 18 years old, he left England behind forever and sailed for America. Cleaver landed in New York on March 13, 1833, but it was not his final destination. Later that year, he traveled west and arrived in Chicago on October 23. 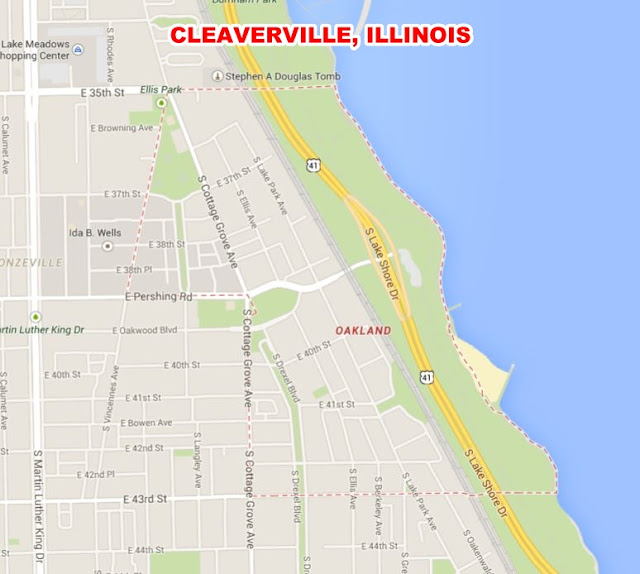 As one of Chicago's earliest settlers, Cleaver was well-positioned to leave his mark on the area. In 1851, Cleaver bought about 22 acres of land from Samuel Ellis, who operated a tavern near 35th Street and Lake Avenue. Very few people lived in the area at that time, apart from a handful of woodsmen and fishermen. Cleaver used the land stretched between 37th and 39th Streets to build a successful soap and rendering works business. And those who have read The Jungle understand what is involved in rendering for soap.

But Charles Cleaver didn't stop there. He bought more land and began building his own company town, which he dubbed Cleaverville. As he built houses and planned roads, he also assumed the responsibility for naming the streets in his new community. Part of the old Chicago-Detroit Trail, as it passed through Cleaverville, was renamed Cottage Grove Avenue for the simple reason that there happened to be a cottage located in a stand of trees in the area. Sources are unclear about whether the cottage actually belonged to Cleaver or whether it was a pre-existing structure belonging to some forgotten woodsman. In any case, the name of the street had fairly literal origins.

Other streets in Cleaverville were given similarly prosaic names. Brook Street, now part of 40th Street, was named for a nearby brook. Oakwood Avenue was inspired by the local trees, and the name Cleaver gave to his own estate on the land, Oakwood Hall. Streets named Cedar and Elm also existed for a while in the community.

After building Cleaverville, Cleaver's most brilliant move was paying the Illinois Central Railroad $3,800 a year to provide train service to his community, thereby transforming Cleaverville into one of Chicago's first commuter suburbs.

The area represented by Cleaverville was annexed to Chicago by 1889, and today forms part of Chicago's Oakland neighborhood, north of Hyde Park. Although the cottage and the grove are long gone, the memory of that landscape remains in some of Chicago's street names.

THE RENAMING OF CHICAGO STREETS
In 1909 the Chicago streets were renumbered and many were renamed because of the annexation of other local communities which had many of the same street names. It became confusing. Named after Charles Cleaver, the first soap manufacturer in Chicago and real estate promoter a street was given the name of Cleaver Street which is at  (1425W) 1100N to 1500N.