The Truth Behind How "E. J. Korvette" Got It's Name and What It Really Means.

THE MYTH:
"E.J. Korvette" was not a person but rather an acronym that stood for "Eight {or Eleven} Jewish Korean [War] Veterans." They were army brothers who started a department store chain after being honorably discharged and back at home.
THE TRUTH:
E.J. Korvette (initially a leather goods retailer) was founded in 1948, two years before the Korean War began in June 1950. E.J. Korvette's was founded by Eugene Ferkauf, a Jewish World War II veteran, and his friend, Joe Zwillenberg. 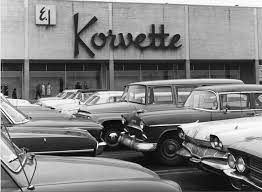 "I had a name picked out for the store, E.J. Korvette. "E" is for Eugene, my first name, and "J" stands for Joe Swillenberg, my business associate and pal."
The name "Korvette" was initially meant to be spelled with a "C" after the Royal Canadian Navy's U-boat hunter, simply because I thought the name was euphonious (pleasant soundins). When it came time to register the business name, we found it was illegal to use a Royal Canadian Naval class identity, so we had to change the spelling to "K."

ABOUT EUGENE FERKAUF:
E.J. Korvette's founder, Eugene Ferkauf, began his discounting career in a 400-square-foot loft in mid-Manhattan, New York City. Inventory consisted of well-known luggage brands, household appliances, and some jewelry. Discounts were one-third off regular prices, and sales were more than $2,500 per square foot. Ferkauf retired in 1968.
The company used several retailing innovations to propel its rapid growth. It used discounting, even though most discounting was known to be outlawed at the time. Korvette instituted a membership program, a technique from consumers' cooperatives that had never been applied to a department store before. It also expanded into suburban locations at a time when most department stores were in central business districts.
Most remembered was their Audio Division, with a higher quality of good brand-name stereo equipment. The Records & Sheet Music Department would get nearly any album, 45(rpm), new or old, and sheet music for any size band or orchestra, at the store, in two days. At least the two-day delivery worked perfectly at the store I frequented at Dempster Street and Waukegan Road in Morton Grove, Illinois.
In 1964, record sales reached $20,000,000 with David Rothfeld, merchandise manager for records, books and audio equipment, described "as hard-hitting as the rest of the young driving force behind Korvette, right up to the company's new 37-year-old President, Jack Schwadron.
Eugene Ferkauf died on June 5, 2012, in his New York Manhattan home.
VISIT OUR E. J. KORVETTE SOUVINER SHOP

Eugene Ferkauf Obituary
New York (AP) — Before the advent of the big box discount store, there was Eugene Ferkauf.
The founder of the E.J. Korvette chain died at his Manhattan home Tuesday, June 5, 2012, at the age of 91, said Yeshiva University, where he was a longtime former trustee and benefactor.
"He was a brilliant entrepreneur, innovator and pioneer of the discounting concept," said Burt Flickinger, III, managing director of the retail consultancy Strategic Resource Group. People from around the globe, including such industry giants as the founders of Kmart and Wal-Mart, studied his stores and merchandising model, Flickinger said.
Ferkauf founded Korvette in 1948, first selling luggage from a loft on 46th Street before expanding to 45 outlets throughout the New York metropolitan area, including on Fifth Avenue just blocks from the upscale Saks Fifth Avenue department store.
He offered deep discounts of up to 40 percent on merchandise ranging from appliances to bed sheets.
Ferkauf was a pioneer in "selling something for every room and apartment and every home," said Flickinger. He also was "one of the great pioneers and innovators in the record and music business," he said.
At his funeral Thursday, one speaker recalled buying his first Beatles album at a Korvette store.
The Manhattan-born Ferkauf sold his share in the store in 1966 for more than $20 million. Korvette went out of business in around 1980.

Time magazine featured Ferkauf on its cover of the July 6, 1962 issue with the title: "Consumer Spending - Discounting Gets Respectable." 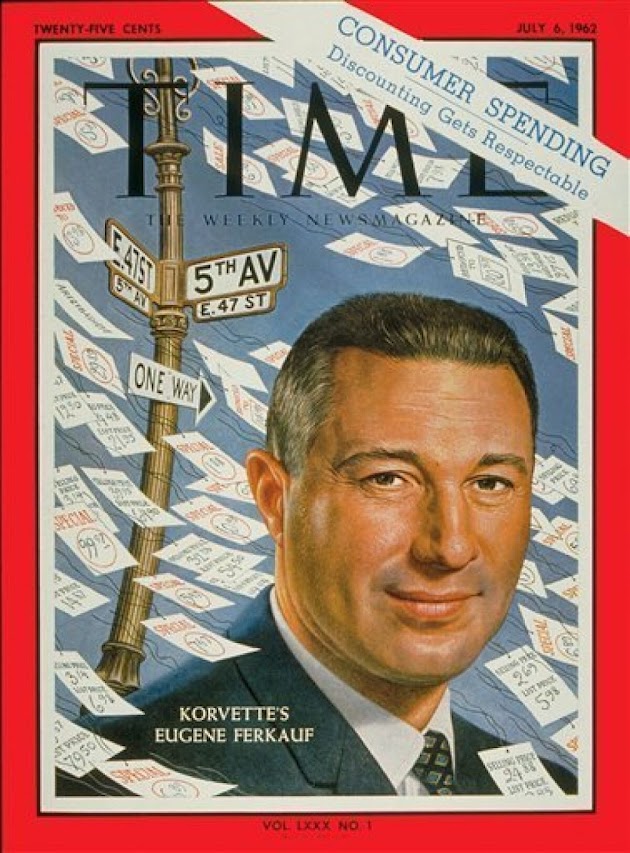 In the article, Harvard Business School retailing guru Malcolm McNair described Ferkauf as one of the six greatest merchants in U.S. history, a group that included Frank Woolworth and J.C. Penney.

"By succeeding at it in the sluggish 1960s, Eugene Ferkauf has seized the lead in a retailing revolution that is shaking up every U.S. merchant from Main Street to Manhattan's Fifth Avenue," the story read.
E.J. Korvette had one of the most explosive growths in any sector of chain retail during 1960s, Flickinger said. And all the major regional discount chain stores sought to emulate it.
"Sam Walton of Wal-Mart himself came to study his Korvette stores," said Flickinger. "Harry Cunningham, the founder of Kmart stores in 1962, studied Korvette stores." Other large chains that extensively analyzed the Korvette model included Zayre, Caldor and Ames.
But Ferkauf, whose name means "sell" in Yiddish, had an adverse influence on some traditional department stores, which struggled "because of what Korvette initiated and inspired through its discounts," he said.
The store's name intrigued many. Many believed it stood for [Eight or eleven] Jewish Korean War veterans, but Ferkauf had a simpler explanation: E stood for Eugene, J for his Brooklyn friend Joe Zwillenberg, and Korvette for the World War II allied sub-chasing ship known as corvette class.
Ferkauf and his wife, Estelle, were generous philanthropists who donated to Yeshiva University, (a private Orthodox Jewish university with four campuses in New York City), and other causes. The Ferkauf Graduate School of Psychology at Yeshiva is named after him.
His burial was at Cedar Park Cemetery in Paramus, N.J.
By, Ula Ilnytzky, Associated Press
Copyright © 2012 The Associated Press. All rights reserved. Published by The Oregonian on June 7, 2012.